Kerry
My husband and I are new puppy owners- this is our first dog together, and we're working through what it means to be puppy parents!

Geez- I can't believe it's been 5 months already! He's looking less and less like a puppy each day! 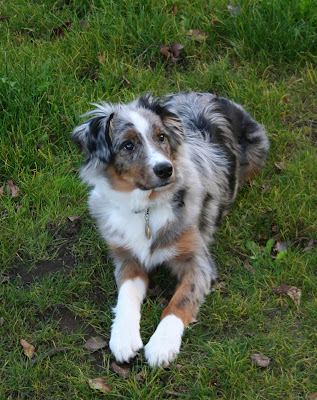 We continue to work on sit and down stay... and I'm sure we'll be learning new things when we start our intermediate class next week! 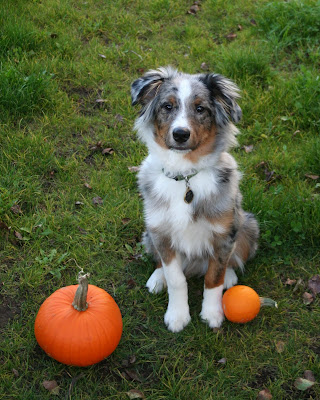 Kirby is also getting ready for halloween... we haven't decided whether or not he'll be subjected to getting stuffed in a costume this year... 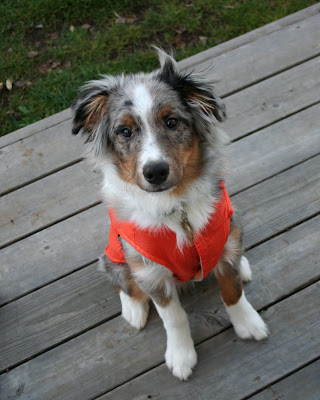 Especially because he's already stuck wearing a coat when the weather is bad. He wouldn't put up with a hood or the booties, so we'll see if this even does any good! 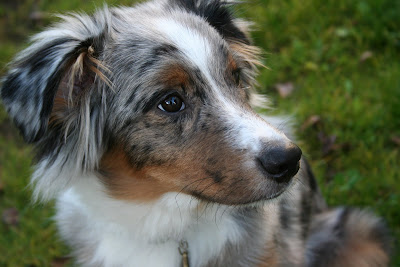 He's such a good boy. He's really getting better at leave it and drop it, and his focus is incredible! Tonight he was more interested in the ball than the other dogs at the park! It was pretty cool! Happy 5 months, guy! :)
Posted by Kerry at 8:04 PM 15 comments:

So, what do you do when it's pouring out, and your dog needs some exercise? I know, the answer is "take him for a walk anyway..." which makes total sense! Except Kirby hates the rain more than I do. It's true! He begs to go out, and then he squishes his body up against the house, so he fits under our tiny awning. I can coax him to play fetch for maybe 5 or 6 throws, but by then he's done.

I guess I should have anticipated this? We live in Eugene, OR... it's not the sunniest city. Stan and I are used to the rain- I don't even think we own an umbrella- but It's as though Kirby came from sunny SoCal or something. (He didn't, his mama is in Washington)

So, what do you do? We can play indoor catch/fetch... we do lots of obedience stuff.... but we don't really have an indoor doggy playplace nearby. Ideas? I'm not a huge fan of clothes on dogs, but has anyone had any luck with raincoats? I know a tired pup is a good pup- and we need a tired pup around here!
Posted by Kerry at 7:37 AM 7 comments:

Come Hop with Us!

And with that, we're off for the weekend to camp/hunt! :) Have a wonderful weekend everyone!
Posted by Kerry at 6:46 AM 6 comments:

Do you know what Kirby loves? 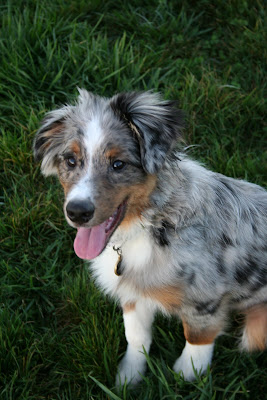 If you guessed the dog park.... you're right! Kirby LOVES the dog park. He would live there if we let him.
I know lots of people have concerns about off leash dog parks, and really, I did too before we started going to nearby Candlelight Park. We've been there almost every night this week (and many, many times before that, too) and we see the same people, and the same dogs, and everyone is responsible... it's just a really great atmosphere. Kirby is making friends. You can tell they're his friends because they're the ones that play with him regularly, and they're the ones that protect him when big dogs get too close. By protect, I mean bark a few times, and then nudge Kirby away. It's crazy how similar groups of dogs can be to children... or at least it seems that way! Kirby even has some dogs that don't like him, for one reason or another. We're pretty good at avoiding those guys.
The neat part is that Kirby is learning lots of new things... like how to share, and how to take turns. See, look! 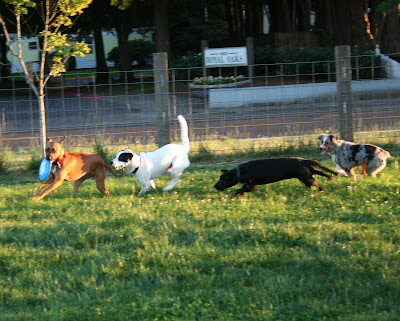 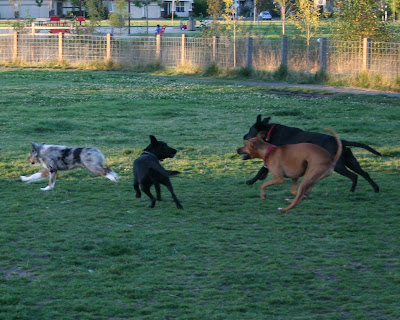 Then the big boys take a turn chasing him!
(Don't worry, Kirby likes it when they do this! He BEGS them to chase)
Kirby also is improving his recall and practicing other skills like sit/down stay with distractions, as well as focusing on what we want him to do- retrieve the ball! Here's one I got right before Stan was about to toss it. He has pretty good focus, and he's improving every day! 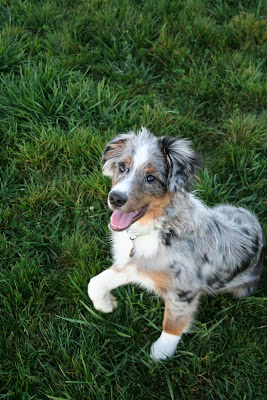 Puppy Class is Over!

...for now anyway. Kirby had his final exam and graduation on Sunday. The exam was tough! Kirby had a really hard time with leave it.... but one of the "leave-it" items was a filled bone... which is Kirby's go-to item when he has to leave the kitty alone. Same flavor and everything! He still passed, but that part was close!

His shining moment though was his down stay. He did really well. What a champ! 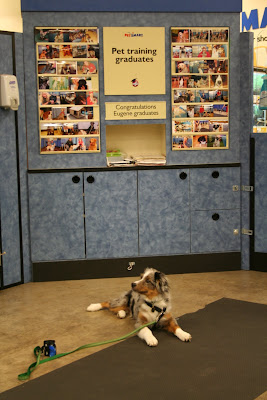 He has his harness on because often times there is something SO EXCITING at class that he pulls (hard!) and chokes himself. He only wears the harness to class.

Kirby and his classmate Ebony both passed the tests. Ebony has had trouble throughout the class, but she was awesome on Sunday too! Look at their grad photos. So cute! 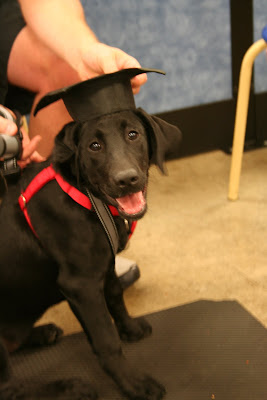 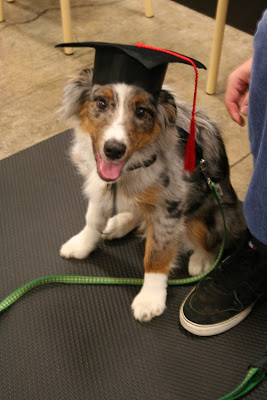 As you can see- Ebony didn't like the hat as much as Kirby did, but she's still one happy pup!
Both dogs are moving up to the intermediate level of training, and will be in the same class again, but this time on Sundays... which actually works out much better for us. Hopefully we'll have a few new playmates in class... we'll see! We'll start up again in mid October. The trainer gave us 4(!!) new tricks to teach Kirby over the break- Shake, bow, sit pretty, and crawl. He's got shake down, and he's pretty good at crawl. Bow is doable, but sit pretty is... well... more like, "Oh, geez, I'm falling!" We might do "roll over" instead. He's halfway there with that one. Exciting stuff!

You'll thank me in a minute.

Kirby's favorite treats are bully sticks. He only is allowed to have them in the living room, and only when we're home. We always toss them when they get to be about 4 inches long, so he won't swallow one on accident (or on purpose!)He was happily munching away on a new stick, laying at our feet while we chatted about our day, and suddenly I hear this... I don't even know... sad gulping sound? I had never heard a sound like this from a dog before. It was definitely sad, and I don't know what the other part of the sound was.

I looked down and asked, "Where's his bully stick?" Stan and I search the floor, and Stan suggests maybe he took it outside... (as if we wouldn't have noticed him picking it up... but hope is hope, right?) so we go out and look. No such luck. Kirby then starts coughing and ... wretching I guess is the right word. I was already on the phone with the vet. They told us to wait it out, watch for diarreha or vomiting. I was skeptical. This thing was over 6 inches long! He wasn't quite half done with the foot long stick. If anything could block his intestines, this definitely could. On the other hand, besides the coughing and occasional wretch, Kirby was acting totally normal, happy, and playful.

I didn't know what to do, so I had Stan call back. They said to bring him in if we were that worried, but unless he exhibited any of the specific symptoms he would probably be okay.

While I was waiting to hear what happened, Kirby started wretching again. I turned around in time to see all 6+ inches of the bully stick come up, along with all of the other contents of his stomach... and they were bright red. I, of course, began to panic. I started looking a little closer at the pile Kirby made, while he recovered. The red wasn't blood. Kirby had eaten a cherry, pit and all. We haven't had cherries in this house... ever? No wait, once. We had cherries here once, back in July(pre-Kirby). I'm pretty sure this wasn't a July cherry, so who knows where he got that. There was also a feather in the mix, along with pieces of treats.

Kirby recovered quickly, and once again we were on the phone. The receptionist told us just to watch him. He'll probably be sore for a few days, but if we notice any outstanding lethargy, or a refusal to eat, bring him in.

Refusal to eat? Kirby? No. Once he got the bully stick up and out, he was ready to go again. He was running, jumping, and just a ball of energy.... so we took him to the dog park, where he played and played, without a care in the world. It was a little too dark for photos. Next time though! :)

We're currently feeling pretty lucky that this went so well. Needless to say, Kirby will not be recieving any more bully sticks. Nylabones will have to be enough!
Posted by Kerry at 6:54 PM 7 comments:

I can't believe it either. Look how long he is! 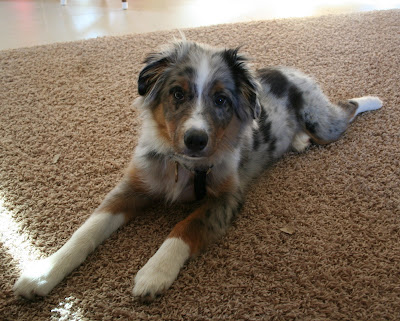 He's mad at me right this second because when he jumps up on the couch I open our bitter apple dabber. I don't put it on him and I don't put it on the couch, I just take the little plastic cap off the top. He can instantly smell it and he walks away growling. I laugh a little bit.
Even though we missed 2 weeks (!!) of our eight week puppy class, Kirby is still ahead of the game. He can sit stay as well as down stay, and he's getting better at "leave it" every day. 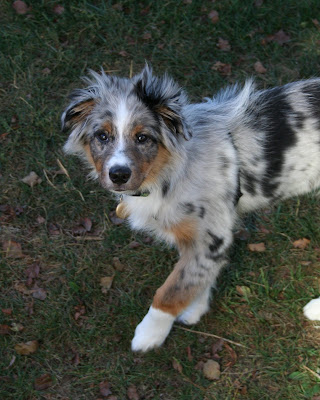 I have to be honest though. The post I wrote last night was an attempt to remind myself of what an amazing wonderful dog he is. He was not acting it last night at all. Lately he's been getting into it with the cat. It used to be a cute thing where he would raise his paw, the cat would give him a look, and Kirby would walk away. He would even lay within 2 or 3 feet of the cat, no problem. Now, if he sees the cat across the room, he runs full speed at the cat and jumps on top of him. The cat falls over and starts biting Kirby's legs (hard!) Kirby then jumps off and starts doing this weird jumpy thing where he jumps up on his back legs over and over again, almost hugging the cat's neck with his front paws. He barks constantly when this happens, and the cat yowls, and it's just nonstop.
We tried body blocking... getting between the dog and the cat and saying "leave it." That did nothing. We then tried tying him up on a 6ft lead when he's in the living room. The cat, when noticing that the dog couldn't get to him, decided to come closer so he could tussle with the dog. Right now the cat is upstairs and I have a baby gate at the bottom to stop the cat from coming down. He has food/water/beds to lay on... The trainer suggested a squirt bottle, so we'll try that... agh. It's frustrating. 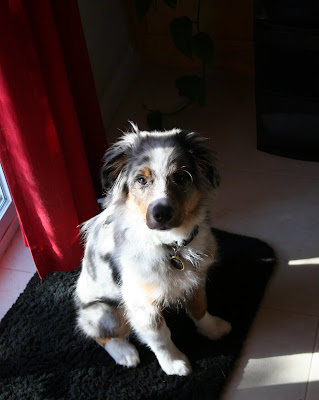 Put Kirby on Your Page! 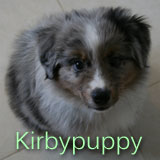